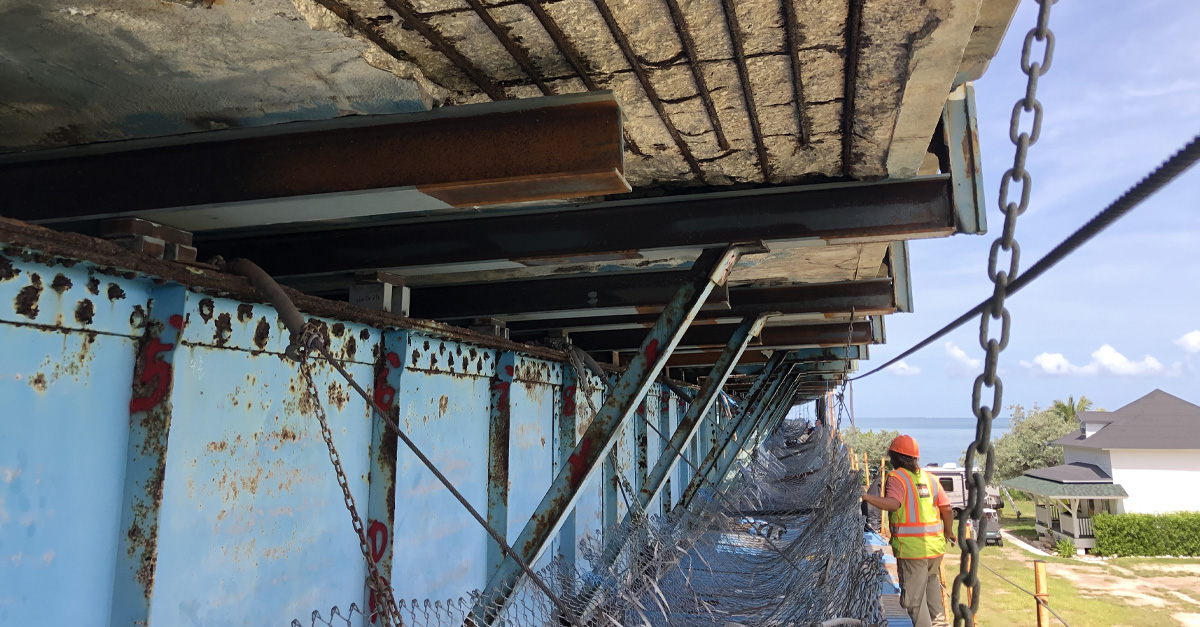 Since I have joined Summit, I have had multiple people interested in the research which I performed as a graduate student/researcher at the University of Illinois at Urbana-Champaign.

This research consisted of integrating bacteria into concrete so that self-healing of cracks through the process of biomineralization could take place. As a Civil Engineer and someone interested in microbiology, this is a field I find greatly intriguing. How great would it be, for Engineers and Scientists, to work together to find a way to greatly reduce the cracking of concrete and greatly increase the concrete’s durability? I could only imagine the cost savings for the agencies tasked with maintaining a concrete structure.

To understand how we could make self-healing concrete possible in this industry, we have to understand how the concrete works, how it is researched, and how it could benefit the construction industry.

What is “Self-Healing” Concrete?

The term “self-healing,” when applied to cement-based materials like concrete, refers to a material that can regain strength and seal itself after it has cracked. Self-healing can occur through different processes, but for this blog, I will focus on biomineralization, a process where bacteria metabolically produce minerals.

Why is it a Vision for the Construction Industry?

All Agencies, Engineers, and Contractors know that concrete cracks. It is inevitable. The cracks may start small, microscopic even, but as time goes on, they tend to widen. A widened crack in concrete will not only lower the concrete’s strength but also increase its permeability. An increase in permeability can have devastating effects on the steel reinforcement (rebar) embedded within the concrete. As permeability increases in a concrete matrix, outside molecules can enter the matrix, eventually reaching the rebar. The compromised matrix then allows for the rebar to exhibit corrosion. As the steel rebar corrodes, it expands, causing the concrete to crack and spall further. The cracks and corrosion will only grow until a sound repair is made to the damaged area.

On all FDOT projects I have worked on, damaged concrete is a major concern and usually requires expensive repairs. Finding a way in which the cracked concrete self-heals would save money by reducing maintenance and repair work. 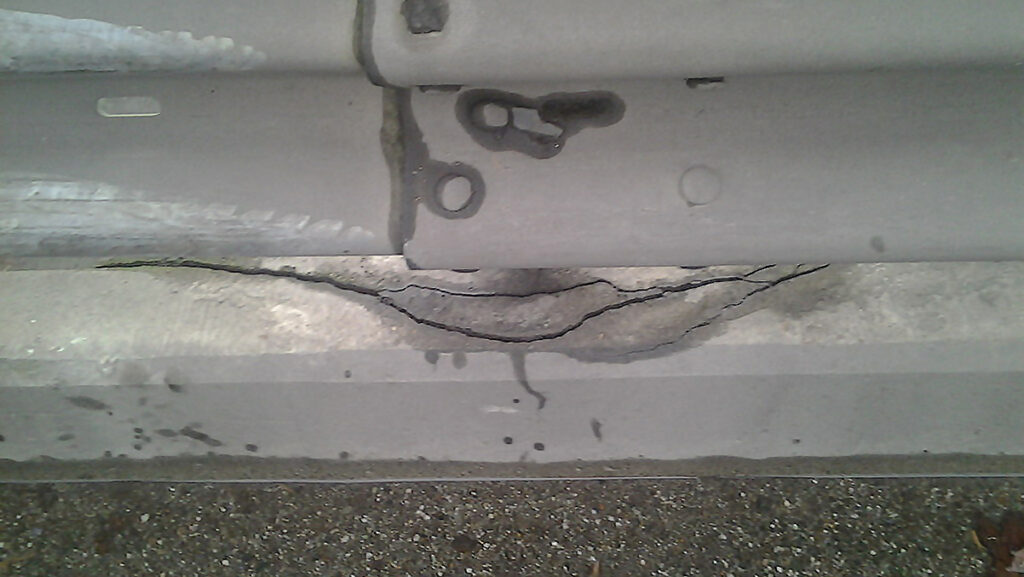 My Personal Experience in Research

For the research I participated in, we used the bacteria Bacillus Pasteurii, a non-pathogenic bacteria commonly found in soil, and introduced it to different cement-based matrices. There are many ways this can be done. The bacteria could be introduced during the mixing process while the material is still in its fresh state or introduced after the matrix has hardened.

The research being performed was still in its infancy at the time, so we started simple, using cement paste as the matrix. We mixed the bacteria into the fresh state by adding water to the cement-based mix. The idea from there would be to add sand (cement + sand + water = mortar) and then a larger aggregate (cement + sand + large aggregate + water = concrete) into the cement mixes. Since every ingredient added may affect the bacteria differently, we started with the simplest mix, cement and water.

In addition to ingredient changes, the environment could also change, as it does in the real world. For lab purposes, we had a timed experiment in which we would mist the hardened cement paste samples with a solution every so often. Some of the samples received multiple mistings a day, a few would receive none, and then there was a range of misting levels in between. The goal was to try and find just the right amount of mistings to encourage a rapid biomineralization process that would seal or heal the cracks. The cracks were induced on the cement paste samples’ prisms by the three-point bending method. Finally, after mixing, bending, and misting the samples, we could perform further tests for strength and permeability to find out if the cracks had, in fact, self-healed. 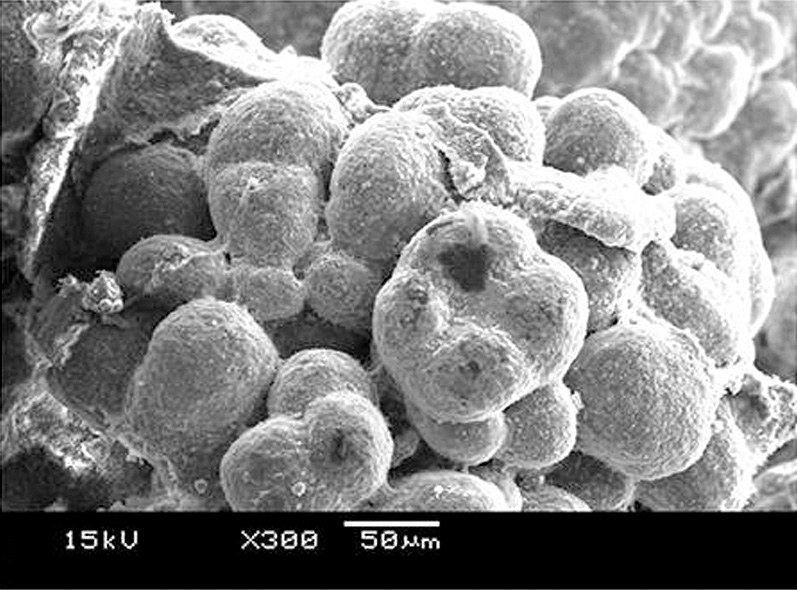 How Does Self-Healing Concrete Work?

Bacteria lie dormant in the hardened cement-based matrix until a crack forms. Once the crack has formed, oxygen, water, and other molecules are available to the bacteria. The mist we used contained food for the bacteria, which caused the bacteria to produce calcium carbonate. It is this calcium carbonate that is desired to fill the cracks in the cement paste matrix. When the cracks are filled with calcium carbonate, this can help prevent further penetration of aggressive ions into the concrete and may even help it regain strength. 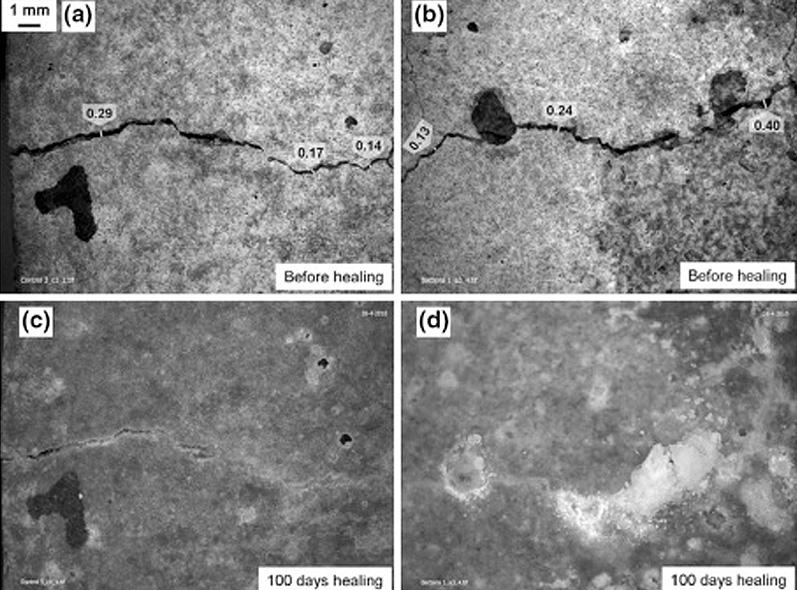 Stereomicroscopic Images Before and After Crack Healing in Control Sample and Bacterial Treated Sample
Reference: https://www.sciencedirect.com/science/article/abs/pii/S0958946511000618

This area of research has expanded vastly. There are a number of research groups all around the world trying to understand how best this technology could be used. One of the major concerns is bringing these experiments full-scale. Everything I have done was performed in a controlled environment, in a laboratory, on small samples. In the real world, concrete is massive, and its environment usually cannot be controlled. Today, groups are attempting to use bacteria to heal or seal cracks on full-sized concrete bodies. Some are having the experiments performed outside, where the environment cannot be controlled.

I have since left the research industry and joined the engineering inspection team here at Summit. Now that I have experience in today’s construction industry, I can see how beneficial self-healing concrete could be. Most of the FDOT contracts I have worked on so far required the rehabilitation of reinforced concrete bridges. If the technology could be tweaked so that it is easily available and consistently producing positive and measurable benefits, it has the potential to save billions of dollars in repair and maintenance work.