How’d I Get Here: Brad’s Journey 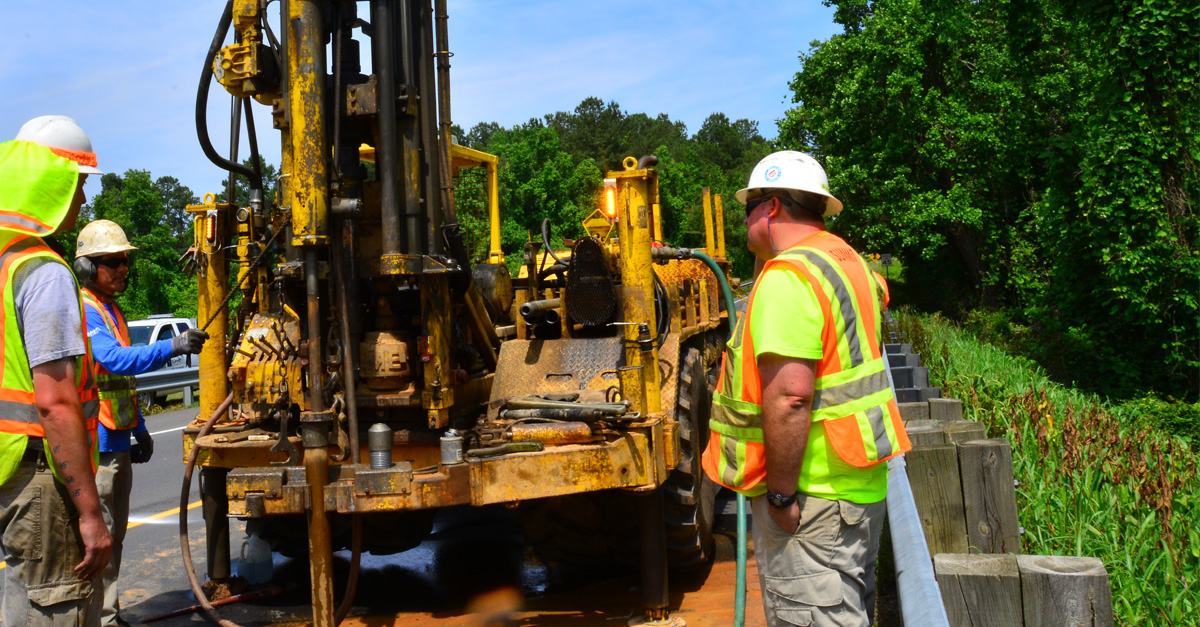 When I first started college, at Wayne Community College, in Goldsboro, NC, I knew little to nothing about the science of geology. It had never been a consideration since earth science was not really taught in North Carolina schools when I grew up. Upon transferring to UNC Wilmington, I was told that I needed one more science elective. It was late in the drop/add period for that semester, and pickings were slim. I chose a Prehistoric Life course. That sounded cool because it mentioned dinosaurs in the course description. Little did I know that would be a life-changing decision.

During that class, my professor, the late Dr. Victor Zullo, constantly tried to emphasize the importance and necessity of the fundamentals of geology governing the study of fossil life. I was drawn to his lectures centered on grassroots geology, the study of the earth (specifically rocks and minerals), how they formed, and how the landscape has changed over time.

At that point, I was an Education major with a History emphasis. I figured I would get a job teaching and maybe help coach football. One afternoon, I cornered Dr. Zullo and asked him to tell me more about geology. I had never considered a science major but was finally excited about something at school. I changed my major to Geology at that point, as a Junior.

Not only did I find a subject that thrilled me, but geology seemed to answer a lot of underlying questions that I had always had about our planet and its dynamic processes. I was never satisfied with being told that the earth’s features were static and have “always been this way.” It was evident that the earth changes. Some changes happen quickly, and some are extremely slow over millions of years. Finally, the different landscapes I had seen, lowlands, mountains, deserts, canyons, and oceans, all made sense because I knew the mechanisms for their formation.

I graduated with a BS in Geology in December 1995 and started graduate school in geology, at UNCW, in the spring of 1996. I NEVER thought I would end up following an academic route, or a graduate degree for that matter. Grad school was one of the best times of my life. It was tough work, and I taught a lot of Intro Geology classes, more than most. My master’s research was located just outside of Brevard, NC, in the eastern Blue Ridge geologic province, where I conducted grassroots geologic mapping and structural/kinematic interpretation along the western boundary of the Brevard Fault Zone. I was in my “zone” and loving school. But then I ran into another life-changing event. I graduated in May 2000 with an MS in Geology. 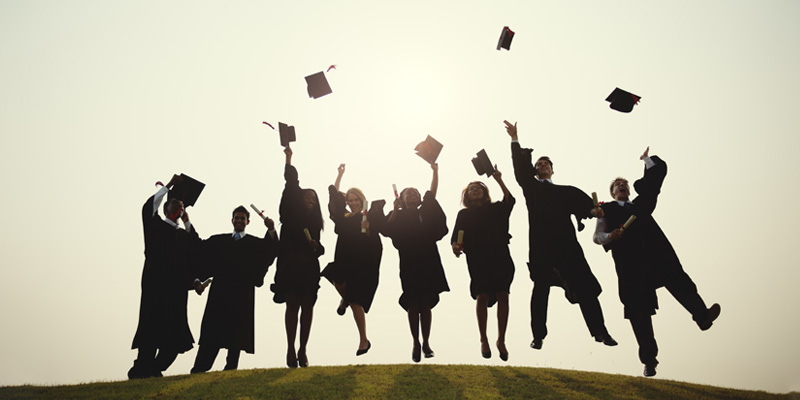 It’s really strange how things that don’t seem suited for us often turn out to be exactly what we needed or a path we were supposed to follow. As I approached graduation with my MS degree, I anticipated finding a job in academia, with the state or federal geologic survey, or possibly with a mining company. I missed several opportunities along these lines. I was running out of options when it was pointed out to me that the NCDOT employed geologists. I had never thought of this, or it had never been pointed out to me.

I called around, found a number for the NCDOT’s Geotechnical Unit, and scheduled a conversation with them. I drove to Raleigh and sat down with John Pilipchuk, PE, PG, the head of the NCDOT’s Geotechnical Engineering Unit (GEU). Mr. Pilipchuk explained what geologists did at NCDOT and how important they were in helping define the subsurface conditions where roads and bridges were being constructed. Being that I had an MS degree, I figured I was destined to start “further up the ladder.” But I had some hard learning to do. I ended up taking a job with NCDOT Geotech as a Temporary Geologist, with no benefits. This was an entry-level position, and I figured it would at least help me pay a few debts and put a line of experience on my heavily academic resume. Little did I know that I would still be in transportation 21 years later and that the experience I gained in those first couple years would be the foundation for what I do to this very day.

As a field geologist, I stayed in the NC DOT Raleigh Geotechnical Field Office (RFO) for just over two years. I was able to be in the field to drill US 64 Knightdale Bypass, small parts of I-540, most of the US 73 Greensboro Western Urban Loop, and various bridges throughout the Piedmont. In late 2002, a job opened in the GEU’s Contracts Investigation Group. It was a promotion to the “Project” level, and dealt with the state-wide oversight of geotechnical investigations for roads and bridges that were sent out to private engineering firms that were on contract with the NCDOT GEU. I worked in GEU Contracts for 9 years and was there at a magical time. We dealt with some very large projects, such as the geotechnical investigations of Bonner Bridge at Oregon Inlet, the US 17 Washington Bypass, the US 17 Wilmington Bypass, landslides in the Pigeon River Gorge; and many complicated investigations from Manteo to Murphy. 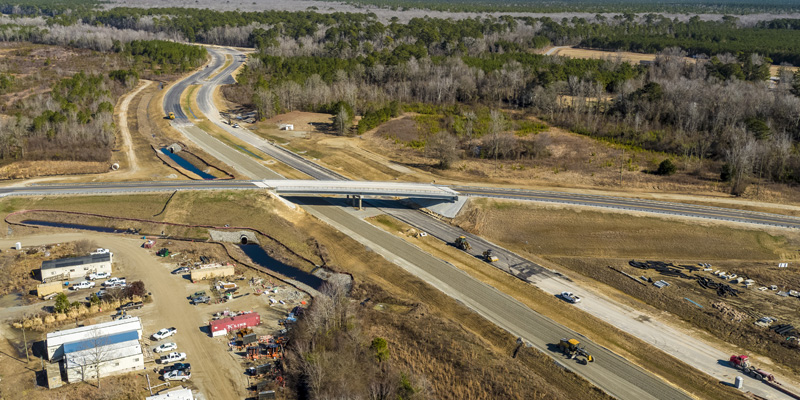 One of the firms that we (GEU Contracts) dealt with was Summit when they got their first NCDOT GEU On-Call contract in/around 2008. I enjoyed working with Don Dewey, PE, when he was at a previous engineering firm, and now that he was a Summit, it was fun to do projects with him again. In October 2011, Summit had just lost a couple of key personnel in the Geotech Department. While I was still at NCDOT GEU, Don Dewey reached out to me and floated an exciting offer.

The Move to Summit

Over the next month, Don and I discussed what role I could play at Summit. Don really needed someone to come in and build a geotechnical investigation team, be the project manager for NCDOT geotechnical jobs, and supervise the drilling staff. One thing I knew was that more than one hire was needed to really help things take off. I suggested that Summit also bring in a young geologist named Brett Smith. Brett was doing fantastic fieldwork for his previous company but was looking for a place that offered a better work schedule. I convinced Don, and he reached out to Brett. I will leave the rest of that story for Brett. I left my nearly 12-year career at NCDOT and joined Summit in December of 2011. Brett Smith came in a few weeks behind me.

Summit was still under 100 total employees at that point! Upon arrival, Summit had three licensed drillers but was only operating one drill rig. Summit had another operational drill rig, and we quickly divided up drilling teams, and within weeks of my arrival, we were running two drill teams simultaneously. We literally had to teach two of the licensed drillers (previously environmental and well drillers) how to drill geotechnical investigations. They are very different worlds. It did not take long for those guys to get into a good rhythm, and we had a lot of fun. With previous employee Alana May’s help, Brett and I ran multiple geotechnical investigations at once. Also, after a few months of commuting from eastern Johnston County to Hillsborough, I became Summit’s first Raleigh employee in Summit’s very first Raleigh office. Brett Smith and then Brandon Johnson quickly followed me. 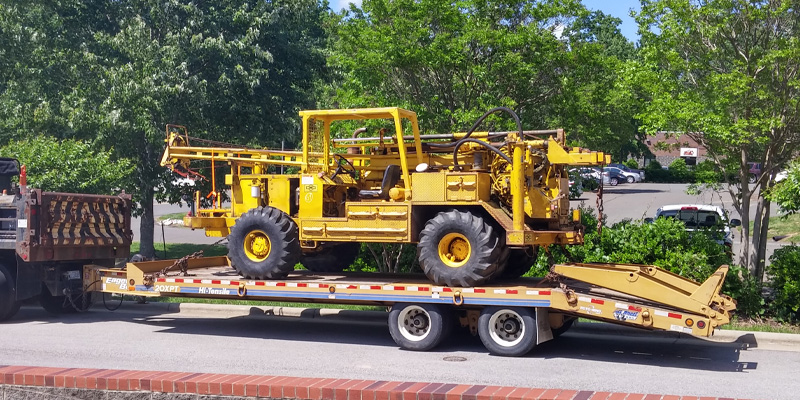 One of Summit’s drill rigs loaded on a truck for transport.

The Here and Now

Going back to my time teaching at UNCW during graduate school, one of my favorite things has been training younger employees. We currently have an outstanding group of young geologists and engineers who all share the goal of doing outstanding work, on good projects, and having fun. Besides my in-house teaching, I am also an active member of the Carolinas Chapter of the Association of Environmental and Engineering Geologists (AEG). I’m currently AEG Carolina’s education outreach representative, and I run our Visiting Professionals (VP) program. In this program, I visit the geology departments of regional universities and, along with another practicing environmental geologist, tell undergraduates and graduate students how I use the science of geology in my job. I took part in the first AEG VP visit in the early 2000s, and it has been adopted by many other AEG chapters around the country. It was through one of these VP visits to UNC-Chapel Hill that I met a young, job-hungry geologist named Aaron Gross—but you have already heard that story!

Why I Love What I Do

Being a geologist is more than just investigating the ground to design a foundation. Every time we investigate the foundation of roadway, bridge, building, etc., we learn more about the subsurface at that exact location. This helps further the understanding of our region’s geologic framework. I am an academic at heart and love nothing more than to talk with other employees, property owners, etc., about “how the rocks got there.” As a high school senior, if you had told me that I would end up with a master’s degree in geology and then work a career in transportation doing geotechnical investigations, I would not have believed it.

It is funny to look back at those pivotal moments, from changing a major very late as an undergraduate to taking a low-level job with no benefits to my move to GEU Contracts, and realize just how life-changing those decisions were. It has been a wonderful ride to this point, and I hope to enjoy many more years of cool projects in all types of geologic settings. 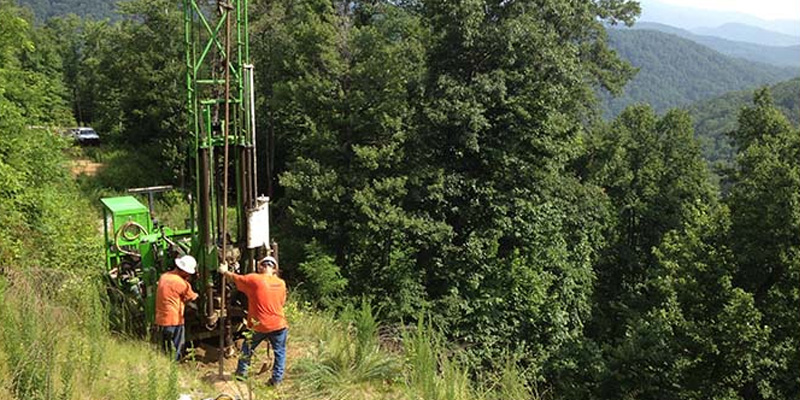